The same website that fostered a social movement bringing Betty White to Saturday Night Live is now bringing BP to its knees, as an ongoing battle with bad publicity is exemplified through the power of Facebook. The oil spill in the Gulf is being called the worst in American history — bringing frequent association with the Exxon Valdez spill. One hindrance that is unique to the BP spill is that this is the first major oil disaster since the popularity of Facebook and other social media platforms. In a time when the sharing of information is no longer filtered through traditional media and word of mouth, BP must be seeing sites like Facebook and Twitter as a significant threat to their brand image. 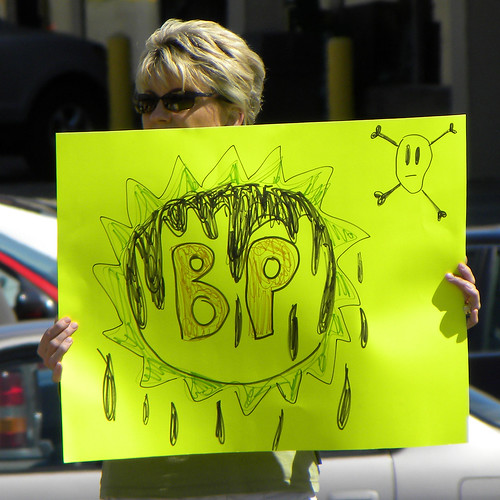 Sharing the story online is what first created wide-spread awareness of the disaster. As a new sharing tool, Facebook is powerful, but typically becomes more powerful when the story is based on popular culture. Once the story changed from an exploded oil rig to a broken oil pipe spewing into the ocean, its Facebook virility value skyrocketed. Nothing spreads faster on Facebook than bad news. Soon the story went from wall to wall to wall, sparking conversations across the globe.

After news stories, it was photos and videos of the oil pouring out under water making an oil slick that can be seen from space, followed by images of oil covered animals washed up on shore. These images are what really began to spark outrage against BP on Facebook as they scrambled to find a solution to the leaking oil.Last but not least are the anti-BP pages. There are over 1,000,000 members of anti-BP pages on Facebook which means hundreds of millions of anti-BP impressions across the network.

Does good travel just as fast?

I wonder if there is any place for BP to try to use Facebook to repair their drastically damaged brand image. Perhaps it could be possible if it were done well, but for now I think they’ve got enough to worry about.

David Trahan is an Associate Account Executive at Mr. Youth in New York City.  Previously, he has held part-time and internship positions with many prestigious organizations including The Advertising Council, Goldman Sachs and The Federal Reserve Bank of New York. He recently graduated with Latin Honors in 2009 with a degree in marketing and a concentration in advertising and promotion from the Pforzheimer Honors College and Lubin School of Business at Pace University. Connect with him on LinkedIn, Twitter, and on his website.