Connections are the strongest form of induction into a newly opened job opportunity. People are the sole contributors to hiring for new positions and control who is placed where in the company, alongside the hiring manager. In general, there are two factors in deciding if you have a job: The human resource recruiter and the hiring manager. If either of these two decision makers hears of interest for a job through their network, those applicants get first shot at interviewing. The closer the connection between the decision maker and the applicant, the better chance for successful job requisition fulfillment. I consider this “The Strength Model” of networking because your network is your strongest bridge into the job market. To better explain this, view the model below. 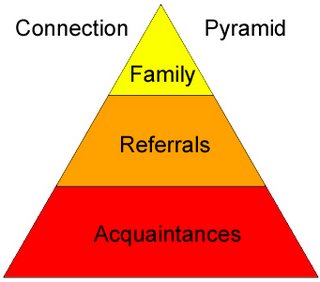 This model suggests that family is the strongest connection, where a hiring manager has a son or daughter that is looking for a job and it is filled almost immediately because of the network strength associated with the relationship. For example, if your father was a Director of Marketing at Proctor and Gamble and there was an entry level job opening in the marketing research department, you would have first pass at that opportunity. Referrals are the next strongest segment to this pyramid because an applicant is usually referred to a hiring manager, based on some level of expertise or job fitting. Referrals could be acquaintances that have been further developed by the art of networking or keeping in touch with an individual (establishing a relationship). You could be referred to a hiring manager by previous work such as an internship or by a family member. Finally, acquaintances are the weakest form of networking, because hiring members would rather hire an individual that they are closer in ties with, rather than someone they just met for the first time. You have many acquaintances throughout your life, many will soon forget you over time, but you never know if one might follow through one of these days.

If I were to rate your chances at each level of the pyramid I would say…..

Remember: Meet as many people as you can because you never know who is connected to whom in each others networks. You should strive to build relationships with your acquintances, in order to convert them to referrals, but family members are always the strongest!