Home › Personal Branding › Paterno’s Reaction to Being Fired Predictable, Quite Common One

Paterno’s Reaction to Being Fired Predictable, Quite Common One 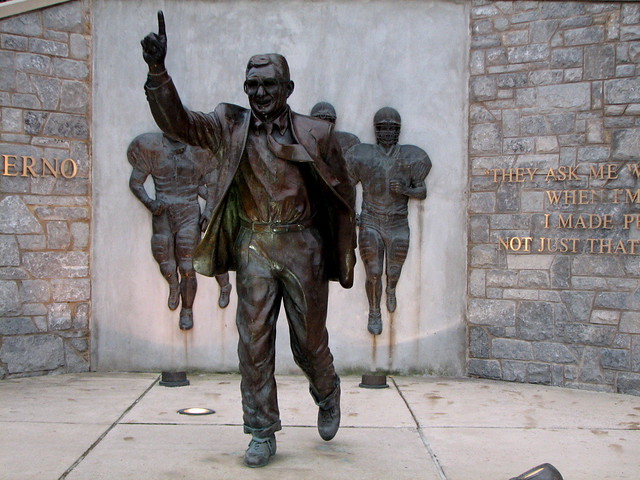 Notwithstanding the significant moral and legal issues involved (which I will gladly leave to the legal system, the media pundits and Penn State University to sort out and further address), it was nonetheless sad to see the 48-year-long, glorious career of Penn State head football coach Joe Paterno come to such an inglorious—and sudden—end. Here is Paterno’s reported initial response to being summarily fired:

“That’s the thanks I get for giving everything to this university for 48 years?!”

I say that this was Paterno’s reported initial response because within hours the media then changed their tune and began reporting that the comment actually had come from “someone ‘close’ to Paterno,” not from the coach himself. To be honest about it, I have no doubt whatsoever that Paterno himself made the comment (or something very close to it) when he first learned he was fired because it is such a predictable and quite common reaction from someone who has just been unexpectedly fired from his or her job! It’s also a comment I have heard more frequently than I like over the years from candidates whom I had earlier tried to place with hiring companies and who ultimately passed on a position to stay with their current employers—only to later re-contact me when they suddenly—and unexpectedly!—were fired. Here are some typical responses from these candidates:

“How could they do this to me after all I’ve done for this company?!”

“I thought my job was safe because I just had an excellent performance review!”

Unfortunately, by the time I do hear such comments from former job candidates, it’s usually far too late for me to offer them much solace or any viable recourse. When they plaintively ask (as most do), “Is the position I applied for still open?” almost always my answer is “No, it’s already been filled.”

The candidate comments to me when they earlier informed me that they were going to pass on the career opportunity being offered were far, far different. These were typical comments I was hearing then:

“My company has really been loyal to me over the years and I would feel like a ‘traitor’ if I left them now.”

“I feel like I’m a part of a ‘big family’ at my current employer. I would really hate to desert them.”

“I hate to give up the good job I have now, which at least pays me a fair salary, to go with another company, about which I really know very little.”

That was before “the hammer” suddenly and unexpectedly dropped on them and they got a real “wake-up” call, a real taste of just how tenuous any job, at any level, can be in today’s economy.

Most of these men and women didn’t lose their jobs because of scandal or alleged performance issues, of course, but that fact hardly mitigated the gravity of their situation or the tremendous personal and professional sense of loss and shock they were experiencing at the time. Their job loss usually occurred for far more mundane reasons. Maybe it was simply because the company wanted to save money and a general staff reduction was implemented. Or, maybe there was a realignment following a merger and “over-lapping” jobs had to be cut, theirs being among the cuts. Maybe they were among the “highly compensated” employees in their companies and the company decided to eliminate their positions and hire two or three new employees for the same cost. Honestly, there could be many and sundry reasons. Bottom line . . . as far as these employees were concerned, it really made little difference at that point what the actual reasons were for their being fired.

How prepared are you for suddenly losing your job?

No longer should you expect to have just one job for your entire working career. As we’ve seen, the jobs of both the mighty and not-so-mighty are continually in flux—for a whole variety of reasons. Unless you have been with your current employer for quite a number of years and are nearing retirement age, you should expect to have a series of jobs throughout your working career. This is merely a hard fact of life in this all-new, unparalleled job market we have today. The question then becomes, are you going to control your own fate and determine both the timing and quality of this series of jobs, or are you willing to cede that control to a current employer, out of some misplaced sense of trust and loyalty? In other words, just how prepared are you if you were to lose your job today?

As I’ve stated a number of times in previous blogs, the idea of loyalty from a company to its employees is really a quaint, anachronistic notion these days, if it ever truly existed. The truth of the matter is, companies are not in the business of making sure all their employees are “fat and happy,” they are in the business of making money! Period. If they are not, they soon will cease to exist, which would mean, of course, that all of the company’s employees would lose their jobs!

Maybe you are one of the (rapidly dwindling number of) men or women who are completely satisfied with their current job and employer. If so, congratulations, and I am certainly not suggesting that you should now become “paranoid” about losing your job. What I am suggesting, though, is that you make sure you are thoroughly prepared if the unimaginable (to you) should occur, and this next Friday, just about quitting time, you receive a “pink slip” and are given all of 15 minutes to box up your personal belongings before vacating the premises—forever!

How should you prepare yourself for this possible eventuality? Here, as a minimum, is what I suggest:

Essentially, I am by nature an optimist, or more precisely, a realistic optimist. You should be too. But, as the late President Ronald Reagan so cogently and sagely advised, “trust but verify.” In the case of your current job, then, I advise you to trust that things are continuing to go well for you, but also to verify that your perception is an accurate one. If your perception should be proven to be a false one, then make sure you are prepared to change course with the least effort and the greatest efficiency because no job today—yours included!—should ever be taken for granted.