Today, I spoke with Michael Roberto, who is a professor of management at Bryant University and author of the Know What You Don’t Know.  In this interview Michael talks to us about solving problems and how companies can solve problems before they even occur in the future.  He also touches upon the reason why companies ignore rising problems, why leaders encourage “useful mistakes” at work and more.

How do companies go beyond mere problem solving to uncover emerging problems?

Leaders need to recognize that problems remain hidden in organizations for a variety of reasons. In other words, barriers exist that typically prevent leaders from hearing bad news or spotting issues in the organization. Those barriers include structural complexity within the organization, which can serve like a dense tree cover in a forest, preventing light from reaching the ground. Gatekeepers serve as another critical barriers.

“Gatekeepers are those people who filter information on its way to senior executives.”

Sometimes, they do so for good reasons. For instance, they may be mindful of how busy a senior leader is, and they may be trying to package and summarize data into a more concise form. However, that filtering often causes critical news about problems to not surface as quickly as necessary. Once leaders recognize that these barriers exist, they must come to grips with the fact that bad news will not come to them. They must go out and actively seek out the problems in their organizations. The book helps identify the skills and capabilities to become good seekers – what I call becoming a “problem-finder,” not just a problem solver.

Why do companies ignore rising problems and what impact could they have if nothing is done about them?

Let’s face it. People often do not wish to be the bearer of bad news. They are afraid of retribution (i.e. will senior people shoot the messenger?). Moreover, lower level employees often worry that they will be seen as incapable if they have to surface a problem to higher levels. They often try to solve the problem on their own first.

Unfortunately, they sometimes cannot solve it, and meanwhile, the problem grows and expands into something far more serious. Leaders must understand that large-scale failures often do not have a single major root cause. Instead, large scale failures result from a chain of errors. They often begin with small problems that mushroom over time… one small problem compounding upon another to form a chain which leads to catastrophe.

What does it mean to become a business “anthropologist”? What is an “ethnographer”? Why is it important?

That means that they observe people in their natural settings over lengthy periods of time, and they draw conclusions from intense observation. Margaret Mead, of course, was one of the most famous anthropologists who employed such methods.

“Ethnographers do not rely simply on large-scale surveys, interviews, or archival data.”

They go out and watch what people actually do. They recognize that people often say one thing and do another. Thus, observation often yields more meaningful insights than surveys, focus groups, or interviews. Leaders need to emulate these techniques. They have to do more than listen to what customers, employees, or suppliers are saying. They must go out and observe these various constituents.

They have to get a first-hand look so that they can see problems firsthand. Many of the most successful leaders that I studied employed such first-hand observational techniques for understanding the true reality of their organizations. Many consumer products firms employ such techniques very effectively. For instance, Proctor and Gamble does not rely simply on focus groups to understand its consumers. It goes into people’s homes to watch them use P&G’s products. Even the CEO and his senior team conduct such home visits. These moments of close-up observation have led to remarkable insights and innovations at P&G.

Why would a business leader encourage useful mistakes in the workplace? 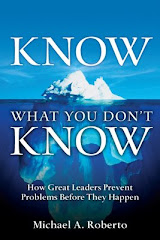 Problem-finding requires a very different mindset with regard to mistakes. How does creating a culture which genuinely tolerates a healthy dose of risk-taking and failure help to surface the problems and threats facing a firm? First, if people fear punishment, they will be far less likely to admit mistakes and errors. Without an understanding of where and how these mistakes are occurring, senior leaders cannot spot patterns and trends.

They cannot connect the dots among multiple incidents to identify major problems and threats for the organization. Heightened tolerance of failure not only surfaces errors that have already occurred; it encourages experimentation so as to increase the pace of problem-finding. As the employees at leading industrial design firm IDEO say, “Fail early and often to succeed sooner.” When people engage in low cost, rapid experiments, they do not immediately discover the perfect course of action for the future. Instead, they gradually identify all the ideas that will not work, all the problems that can derail a particular strategy or initiative.

Michael Roberto is a professor of management at Bryant University in Smithfield, RI. He joined the faculty at Bryant after six years as a faculty member at Harvard Business School. He’s also spent time as a Visiting Professor at NYU’s Stern School of Business. His research, teaching, and consulting focuses on strategic decision-making processes and senior management teams. His most recent book, Know What You Don’t Know: How Great Leaders Prevent Problems Before They Happen,(Wharton School Publishing, 2009) offers practical insights for managers based on this research. The book focuses on how leaders can improve become more effective “problem-finders” – hunting down the festering issues that could erupt into major catastrophes in their organization.