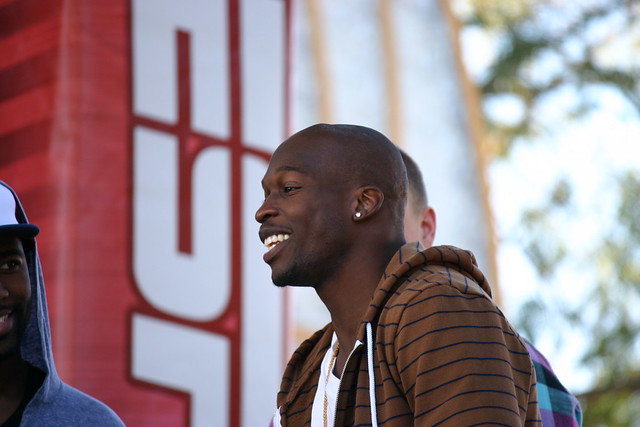 From a grading perspective, Chad Ochocinco gets an A for Brand Authenticity.

He speaks his mind, shares his emotions, and tweets with abandonment. The man is a self-marketing machine. He has ridden bulls for charity, tried out for Sporting Kansas City of the MLS during the lock-out, danced with stars, and has his own iPhone app “madd chad”. Whether his relationship with equally spotlight loving fiancée Evelyn Lozada, or his twitter chatter with his fans, there seems to be nothing off-limits to the public with regards to his life

It is his transparency that makes him endearing and approachable. In fact, it was his recent transparency with regards to questions surrounding the State of the Union that hooked me in. As one who tends to still over think every one of my tweets, what I loved most about Ochocinco’s twitter stream was that he wasn’t afraid to ask questions and showcase his lack of knowledge in the political party landscape. Or to be more specific, whom the Speaker of the House (John Boehner) was. So few people are willing to do that – seem unknowing in a situation…let alone to 3M followers. He didn’t try to tweet about the issues, or fake expertise, he was just being himself. It is because of this that many who might not have tuned into to watch the SOTU, ended up doing so. The best part is that Boehner tweeted him back. Read the Twitter stream here. Looks like our house speaker might also know a thing or two about Ocho’s impressive Twitter following and the power of social media.

But Brand Authenticity can only take you so far, because without goals and a vision, you have essentially handcuffed your own brand.

My fear for Ochocinco is that this is where his brand is. He does a lot of things, but nothing that seems sustainable once his football career ends. That is, unless his goal is to live in the world of reality television (he and Evelyn have a possible show in the works), which is also only a short-term solution. He has certainly set himself apart from others, but what does he stand for? Is it his drive to be famous? To be a social media mastermind? He talks about his Prius quite a bit, but is he environmentally conscious or just trying to be different? Right now it certainly isn’t for his performance on the football field, which is so vital to his overall brand. The unfortunate truth is that his level of relevancy will slowly deteriorate once he stops playing football, and even faster if he continues to play the way he has. It is for this reason that he needs to have a vision for the Chad Ochocinco Brand during and post football, complimented by a strategy for how to achieve it.

He is a hamster spinning his wheel at high speed, working hard both on and off the field, but lacking effectiveness. He doesn’t appear to be actively selling anything on his own or seeking out endorsers to help elevate his brand status.

The worst you can do for your brand is to have the power of popularity and have your audience not knowing what you stand for.

So while he gets an A for Authenticity, he receives a C- for Brand Effectiveness and Clarity.

Make sure you don’t let your brand fall into the same trap.