The social world has become much more social lately with the release of The Social Network or affectionately dubbed, “The Facebook Movie.” Now more than ever, people are flocking to the Internet to connect with their friends, check out potential dating prospects, find out what time that party is tonight, and send messages to loved ones deployed or living across the world. What does this mean to you? More people to sell on your personal brand vision.

Facebook currently has over 500 million users with the largest amount of those users being 35 and over.  Since its creation over 6 years ago, Facebook has expanded its membership base by opening up the site to those in college networks, those in city networks, and eventually to everyone. However, with the increase in Facebook users came the decrease in “exclusivity” which seems to be at the core of Facebook’s founding. To combat this issue, Facebook created “Facebook Groups” giving users an option to choose who can fully see personal information they display based on certain groups or memberships. Many claim that bringing in Facebook groups is just a sorry attempt to try and maintain Facebook’s  former “invitation only” status. 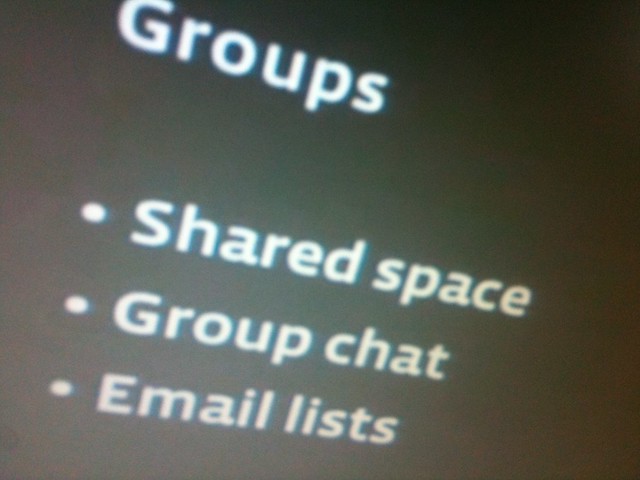 Groups will allow users to place certain friends within different groupings that allows for them to see posts that would only be relevant to each other. Another benefit of Groups is the group chat feature, which will work like a mini chat room within Facebook Chat. According to a Huffington Post article,“The new Facebook Groups is a “social solution” that takes advantage of real-world connections. [Facebook founder]  Mark Zuckerberg compared it to Facebook’s current photo technology in which you can quickly and easily tag friends. Like photos, groups don’t have to be set up by everyone themselves and parts of the process will be automated.”

The new groups functionality allow for increased visibility for your brand among smaller sects of people. By giving groups increased functionality and support, Facebook is empowering the personal brand generation to create groups that further define the meaning of “networked.”

Will groups be as a big as a hit as Facebook hopes? Or will it’s exclusivity allow it to just become a bothersome feature? The product is currently being compared to Twitter’s Lists feature. Yet, the ability to limit visibility of certain posts could put Facebook Groups on top. Once the feature becomes popular we’ll revisit the reaction, but until then get ready for some changes to your Facebook homepage.

What does this mean for personal branding? As of now… not much of anything. It is up to you to decide how to use this new feature to further your personal brand. Other than exclusive groups and networks… how can the new groups feature support your brand?

Kyle Lacy writes a regular blog at KyleLacy.com and is founder and CEO of Brandswag, a social media strategy and training company. His blog has been featured on Wall Street Journal’s website and Read Write Web’s daily blog journal. Recently, Kyle was voted as one of the top 150 social media blogs in the world (on two websites), and produces regular keynote speeches across the Midwest. He also just finished writing Twitter Marketing for Dummies by Wiley Publishing.