I love hearing your personal branding success stories, so if you have one, please email me (dan.schawbel@gmail.com) and I’ll post it on this blog.

Today’s source of inspiration comes from one of my good friends, Scott Bradley. Scott, just like Jason Alba, Ann Handley, Chris Russell, Tiffany Monhollon, Adam Salamon, Rebecca Thorman, Paul Gillin, Drew McLellan, Maria Elena Duron, Rick Mahn, and Connie Bensen, knew me before I was written about in Fast Company and my success snowballed up until what you see today. They’ve been with me still and I appreciate it. Scott is the Marketing Director for Personal Branding Magazine.

Scott is a special, passionate and intelligent human being. As one of the great networkers of the millennial generation, he understands the most important rule, “give before you receive.” Today, Scott talks about how he scored his current job, after being a Boston College student and working full-time at Macy’s in New York. I know Scott quite well and told him he wouldn’t last there (and that he would start his own business). I should have bet him money! 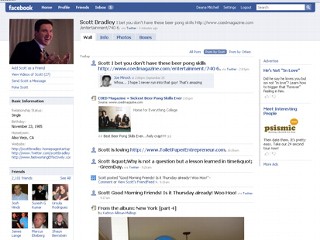 My personal branding success story starts at Boston College my junior year. I had just taken over the Boston College Entrepreneur Society, and aside from providing an entrepreneurial voice on campus, I wanted to also bring speakers to speak with the members. Over the course of the two years I brought somewhere between 2-3 speakers a month and with each speaker I invited, they received an article in our newspaper. About 95% of the speakers that I invited came from networking on Facebook.

During the beginning of my senior year, I was contacted by Mike Michalowicz, on Facebook, who invested and still invests in young entrepreneurs. He wanted to come and speak to our group about entrepreneurship and share his entrepreneurial success story. As someone who had built and sold two multi-million dollar companies, one being sold to a fortune 500, there was no way I could not invite him. After his speaking engagement, I invited him out for a beer where I got to know him further. We immediately clicked, and stayed in touch from there.

Around this same time, I was interviewing for jobs for after I graduation and just recently secured an opportunity with Macy’s Home Store in NYC. As I was excited about this opportunity, I knew I would always work on my other entrepreneurial projects to eventually get out of the corporate world and on to doing my own thing helping millions of people.

But wait there is hope

Around December of my Senior year during my Christmas break, Mike Michalowicz approached me and told me that he was writing a book and that he needed some help. Me being the give-to-give guy that I am gladly offered to help him with feedback and making the book the best it could be. The initial title of the book was called “Launch,” and then later was changed to “The Toilet Paper Entrepreneur.”

I read the manuscript, and then got back to him with my feedback. When I thought that was all I could contribute to the project, he then came to me during the spring time and told me, “Ok Scott, the manuscript is done, the title has been changed…now we need help figuring out our marketing strategy and how we are going to leverage social media to build our audience of hungry buyers.”

Because I love marketing, social media and building relationships with people through many of the social networking sites, the marketing ideas FLEW out of me. Before I knew it I had built the entire backbone of the marketing structure for the campaign, and structured the website in a way that would foster continual engagement, provide value, and in turn sell books to spread the message!

First day on the job

As I started my job with Macy’s, I went into the executive training program. After I had contributed all of the time that I had to Mike’s project…I decided that I was going to be with him the entire way to reach and achieve his goal of selling 1,000,000+ books and further changing millions of peoples lives in the process. Now mind you, I was still working for free.

I started my Macy’s job on June 23rd and from there my life began to get a little crazy. My days began at 6AM when I woke up, and didn’t end until 12PM at night. I would literally be coming home from work at 6:30pm and continued to work on Mikes project to make it a true success. After launching his website July 2nd it was a full blown pre-launch with the Facebook group that is 1300+ members now, and further an opt in list to boot!

And then the day came…2 days before my graduation from the training program at Macy’s…At 8:30 AM I see that Mike is calling me. I pick up and say “Your calling quite early this morning…whats up?” First words out of his mouth… “How much is Macy’s Paying you?…I say XYZ.” He then goes, “How about I give you XYZ and ABC and you start with me full time as my right hand man who manages the brand/marketing/pr to launch this book?”

My jaw dropped to the floor…and to make a long story short I came to the end of the day and gladly accepted.