Today, I spoke to Tory Johnson, who is the Workplace Contributor on ABC’s Good Morning America and has just released her latest book called Fired to Hired.  In this interview, Tory explains the steps you’ll need to take to survive a layoff and come out ten times stronger.  She’ll tell you the mistakes people make after a layoff, how she got her cool gig at ABC, what the popular job search tools are and more.

Tory, what is the first thing you would do if you got laid off tomorrow?

“Two things simultaneously: Indulge in a pity party–give yourself a moment to let your emotions run wild.”

You’ll no doubt feel scared, frustrated, angry, and maybe a tinge of relief. Acknowledge those concerns, but don’t allow them

to consume you. After all, you’ve got a lot of work to do. Focus on your finances. If you’ve lived paycheck to paycheck, it’s time for a reality check. What are your monthly obligations and which ones can you lower? How much money do you have in reserve? File promptly for unemployment, with an emphasis on accuracy and honesty so your claim isn’t delayed or denied.

What 3 mistakes do you see people making most often when it comes to recovering from a layoff?

1.  Trotting out the “nobody’s hiring” excuse. By assuming “there are no jobs out there,” you’re looking for an easy excuse—a crutch—to throw in the towel and give up on your search. When I appeared on Larry King Live earlier this year, a caller phoned in to ask how he could possibly find a job when 90 percent of the local employers in his area weren’t hiring. My answer is always the same: Focus on the other 10 percent. You don’t need 100 percent of the employers to be in hiring mode. You only need one to say yes. 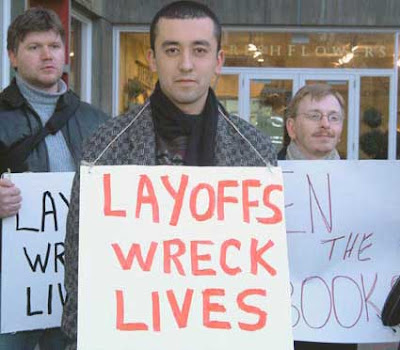 2.  Talking mainly about your needs. It’s not about what you want, dummy. It’s about what they want. No employer will hire you because of what you want—such as an “opportunity for growth in a progressive company.” Forget that nonsense and recognize that you’ll only be hired based on what the company wants. Figure out what they want and position yourself as an ideal match. (Ultimately you have to want the same things for yourself, but as a jobseeker, sell yourself based on their needs first, not your own.)

3.  Spraying and praying. Only a fraction of online time should be spent on the giant job boards because they lead to a false sense of accomplishment. You submit hundreds of resumes and you feel pretty good about yourself. You assume someone out there will respond to at least one, if not more, of your submissions. All logical assumptions—and all wrong. Job searching in a recession is more about quality than quantity. If you’re not following up and proactively reaching out directly to decision makers, your chances of being discovered in that big black hole are slim.

How did you get your cool job with ABC News?

When I started Women For Hire in 1999, I had no advertising budget – zero dollars. I also knew from the years I spent in public relations that editorial coverage, which is free, is more impactful than any form of paid promotion. So I pitched myself to local TV and radio stations to tout my free career expos as a service to their listeners and viewers. I started to get good at it, and ultimately built the courage to pitch a segment idea to the producers of Good Morning America. They booked me on the show for a segment on how to make extra money during the holidays. It went well, so they had me back again and again. It’s now been five years and I’m honored to be the Workplace Contributor for the program.

What obstacles did you face when you were laid off from your previous role?

When I was fired from NBC News from a job I loved and a place I considered heaven on earth, I was stunned. I thought my world had come to an end. I was embarrassed. I didn’t want to talk to anyone. I stayed in my apartment for weeks and weeks. Ultimately I had to accept that the job was over, but my life and career could continue just fine. I had come out of hiding, pick up the phone and reach out to all of my contacts. I had to hold my head and realize that the skills and successes were still mine—and nobody could take those away.

You hear from job seekers all the time. What is the most popular online tool they are using to find a job?

Sadly, the sites they turn to most often are the giant job boards. That’s fine for finding job leads and getting a sense of who’s hiring and what’s out there. But it’s hardly enough. I steer them to social networking sites. Anyone looking for a job should be on LinkedIn, Facebook and Twitter. It’s not good enough to simply have an account and amass a slew of contacts, friends and followers: you’ve got to work those connections to make them work for you.

Tory Johnson is the founder and CEO of Women For Hire, which is the only producer of high caliber recruiting events for women. Johnson is the Workplace Contributor on ABC’s Good Morning America, where she reaches millions of viewers on a wide range of job-related issues and challenges. She is the anchor of Home Work on ABC News Now, the digital channel. In addition to her television and online segments, Johnson writes columns for ABCNEWS.com and Yahoo! HotJobs and Shine among others. She is a frequent speaker to audiences nationwide, ranging from college campuses and Fortune 500 companies to prestigious conferences, where she shares strategies and solutions for finding success and satisfaction at work. Glamour magazine dubbed Johnson the “raise fairy godmother.” Johnson’s fourth career book, Will Work From Home: Earn Cash Without the Commute was published in 2008 and became an instant New York Times and Wall Street Journal bestseller.  Her latest book is called Fired to Hired.