All, the next few weeks are going to be very busy, challenging and hectic for me as I go through the editing phase of my book, which is due to production in just a few weeks. If you email me, I will send a quick response, but save it in my inbox when my time frees up to give you the attention you deserve. From what I’ve heard, you might see it on Amazon come November, but it won’t be in book stores nationally until next April (2009). My good friends at Kaplan are going to be publishing it as well!

My book is on personal branding (go figure!) and is targeted at Gen-Y/millennials/students who are trying to figure out how to get the job of the their dreams, without desperately applying for jobs. Just about anyone can benefit from it though. As you know from reading this blog, there is A LOT of information to cover, but in the book you will find all the basics to help build brand YOU. The title you ask? I’ll be revealing that sometime soon. 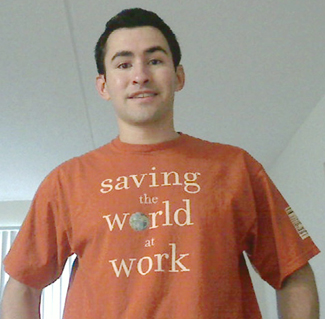 Are you saving the world at work? I am!

Tim Sander’s wants you to save the world at work. As you can see above, he has even designed promotional shirts for his new book, Saving The World At Work and a promotional video explaining how he’s going to market it (a must see for book authors). Tim is a personal branding evangelist and understands that companies succeed when they treat their people right. His new book, which you can pre-order on Amazon.com right now, comes out on September 16th, which is 2 days after my 25th birthday. His first book, called Love Is The Killer App was a New York Times and international best seller. Tim was also Yahoo!’s Chief Solutions Officer.

Tim believes that companies need to make a difference in society through products, manufacturing methods, environmental efforts and community outreach. He believes, and I agree with him, that companies that do not clean up their acts will be left in the dust. In Tim’s book, he makes a compelling argument for the necessity for businesses to appeal to their customers’ hearts as well as their wallets. If you can’t wait for the book, you can also subscribe to his popular blog.
Update: Tim is looking for editors for his new website. Apply here!

I’m speaking in Boston on Wednesday

This Wednesday from 6-9pm in Boston, I will be presenting LIVE to raise money for a non-profit called “OYFP.” It’s a free event and all are welcome if you’re in the area. As always, it will be video recorded and blogged about. The place will be at the Kennedy’s Midtown in Downtown Boston on 42 Province Street.

Appetizers will be available at a 30% discount for event attendees. A $3 suggested donation is optional.

Stephen M.R. Covey just wrote an amazing book on probably the most important part of relationship networking, “trust.” It is called The Speed of Trust and Stephen draws on businesses cases from his years as a CEO, reminding us that there’s plenty of room for improvement on this virtue. His father, and very famous author, Stephen R. Covey, wrote the forward of the book. By focusing on building trust you will be more productive and live a more satisfied life. Trust, says Stephen M.R. Covey, is the very basis of the new global economy, and he shows how trust—and the speed at which it is established with clients, employees and constituents—is the essential ingredient for any high–performance, successful organization.

Srikumar S. Rao wrote a book called Are You Ready to Succeed?, which is based on a course he taught at

Columbia Business School. It is a Buddhism-inspired self-help book with tools to effect fundamental changes and find inner peace. His goal when writing this book was to help people along the path of self-improvement and corporate enlightenment. This book will help you become at peace with yourself and make for a better life and work experience. The book is an international best-seller and has been translated into many languages and distributed in all continents. He has conducted workshops for and spoken before executives of Microsoft, Google, Lehman Brothers, McDonald’s, Chubb, IBM, United Airlines, Allstate and dozens of others.

Spencer Ante has been writing about technology, business and culture for more than 12 years. He is currently the computers department editor at BusinessWeek. His new book, Creative Capital, is a book about Georges Doriot who created the venture capital industry. It traces the pivotal events in Doriot’s life, including his experience as a decorated brigadier general during World War II; as a maverick professor at Harvard Business School; and as the architect and founder of the first venture capital firm, American Research and Development. It artfully chronicles Doriot’s business philosophy and his stewardship in startups, such as the important role he played in the formation of Digital Equipment Corporation and many other new companies that later grew to be influential and successful.

Jerry Porras, Stewart Emery and Mark Thompson’s book Success Built to Last is one remarkable book. Porras, who co-wrote the original Built to Last, teams with successful life coaching company co-founder Emery and top executive coach Thompson, to interview 300 successful people, tagged “builders,” to uncover the secrets of their winning life journeys. They interview extraordinary business people such as Nelson Mandela, Jimmy Carter, Jack Welch and Steve Jobs. You will learn so much from hearing from these leaders in this book it’s not even funny. Prepare to learn from the best.

Matt Richtel wrote a piece of fiction that will make you get HOOKED (that is also the title). Matt is currently a New York Times reporter and will be releasing another book soon. Here is a quick summary of his current book to “hook you.”

Nat Idle, a medical student turned journalist, sits in a San Francisco cafe when a woman puts a folded note on his table. Nat picks up the note, walks to the door to follow her, opens the note and reads: Get out of the Cafe, NOW! The cafe explodes. Sitting in the rubble, he discovers the impossible: the handwriting on the note appears to belong to his deceased ex-girlfriend, a powerful venture capitalists who died four years earlier. Thus begins Hooked and Nat’s frantic quest for answers. His search ultimately presents him with a series of surprises and twists and leads him to discover unnerving truths about himself, and the frenetically-paced digital world he inhabits.