Today, I spoke with Jamie Malanowski, who is a former managing editor for Playboy. Jamie gives you the inside scoop, from behind the scenes, on how to build a strong personal brand in journalism. We go over how he got his job, how the Playboy brand has impacted his personal brand, some tips and how you can translate your writing gig into a book deal.

Jamie, how does one get a really cool job like being the managing editor

In a specific way, I knew the right guy at the right time. Prior to being hired, I had contributed to Playboy for several years. In 2004, just at a time when I was looking for work, my friend Chris Napolitano, who had been the editor of many of those pieces, became the Editorial Director of Playboy, and had a an opening for a senior editor. Based on the work I had done for Playboy, and for many other magazines before that, he offered me the job. A few months later, our very capable Managing Editor left, and I succeeded her. But in a more general way?

“One gets the job by showing all the skills one must possess as a writer, an editor and a manager.”

Everyone knows the Playboy brand (gorgeous nude woman). How did this brand impact your ability to write for other media sources, such as the NY Times and Vanity Fair? 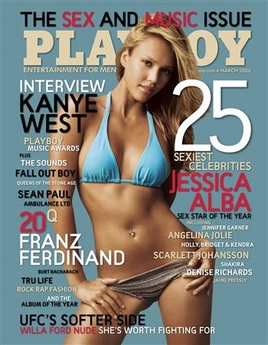 Well, I did not pursue assignments from those particular publications while I was working for Playboy, nor from many other publications, either. Believe it or not, the job absorbed a lot of my time, and with the creative energy I had left over, I wrote a novel, The Coup, which was published in 2007. I don’t think my association with Playboy has hurt me professionally, although time will tell; I left the magazine in October, and we’ll see what the consequences are. One of the things that was fascinating about working for Playboy is that it is such a large institution, one with a long history and a big reputation.

Everyone that one meets has some opinion about Playboy, and those opinions can very different, depending on how old they are and when they encountered the magazine. Many older people, remembering the magazine’s role in the sexual revolution, still think of it as hip; many younger people think of the magazine as simply a party animal’s publication. And often those impressions of the magazine are not based in reality. However, whatever people think of the magazine initially helps frame their opinion of you–since you work for this kind of magazine, you must be this kind of person. All I ever tried to do was be myself, and tried to represent the side of Playboy I was most comfortable about–the side that was intelligent, curious and open-minded.

What 3 tips would you give to someone first starting out in writing/journalism?

When I started out, I sought advice from two very fine journalists, John Leo (then of Time) and Nick Pileggi (then of New York magazine), and each of them, unknown to the other, gave me identical advice:

“Write as much as you can, and go to as many parties as possible.”

Both tips turned out to be amazingly useful. To those I’ll add this: be aggressive. No editor in whole wide world has ever woken up and thought, “Let me see what shy, hidden talent I can uncover today.” It’s a put-yourself-forward business, one in which people value enterprise, energy and persistence in a young person above something vague and evanescent as talent.

How did you get your book deals? Was it easier to get book deals after you had written your first one? What did writing books do for your career?

No coherent strategy informed all four experiences. The most significant experience was the most recent, namely the publication of The Coup in 2007. It almost goes without saying that the key to selling that novel was first writing it. I didn’t have to pitch an idea to an agent or an editor–they could read the thing! And as far as I know, I would have to do that again in order to publish another novel. I’m not John Grisham or Stephen King; no one will buy a book from me sight unseen. Although The Coup did not sell well (don’t get me started on modern bookselling practices), it was reviewed very positively, and the overall experience has had a very positive impact on my career. In my business, it’s still something of an achievement to publish a book.

As part of the media, how do you deal with PR people and their pitches? Who do you tend to listen to and who do you ignore?

There’s no secret to this–I begin by knowing what I’m interested in and what my readers might be interested in. After that, it would take a pretty terrible publicist to turn me off of a person or a product I care about, and by the same token, it would take a remarkably capable something to get me to spare a minute for something that’s useless to me. That said, I do have some congenial relationships with some publicists with whom I have worked successfully in the past, and I give them time and attention even when what they’re pitching is only remotely interesting. Tomorrow, after all, is another day.

——–
Jamie Malanowski is a writer and former Playboy managing editor. A member of the original staff of Spy, where he worked seven years, Jamie has also been an editor at Time, Esquire and most recently Playboy. Jamie has written for The New Yorker, The New York Times, Vanity Fair, The Washington Monthly, and many other publications. He is also the author of the novels Mr. Stupid Goes to Washington (Birch Lane, 1992) and The Coup (Doubleday, 2007); co-author with Kurt Andersen and Lisa Birnbach of the play and book Loose Lips; co-author, with Martyn Burke, of the HBO movie Pentagon Wars; and co-author, with Susan Morrison, of the humor book Spy High.